Helped in part by reduced tax rates corporate profits soared in the first quarter. With the vast majority of S&P 500 companies having reported, earnings are up over 24% as compared to the first quarter of 2017. That’s an astonishing increase this late in an economic expansion.

The good news is that higher earnings make price-earnings ratios, which had ventured into extreme territory, look considerably more rational. It’s not unreasonable to think that S&P 500 earnings could come in at around $140/shr in aggregate for the full year. (As always we’re talking about reported earnings, not operating earnings, a.k.a. earnings without the bad stuff.) That would put the price-earnings ratio at a shade under 20. Interest rates have climbed but they’re still pretty low, so that p-e ratio may not be unreasonable.

The problem is that profit margins are sky-high and you have to wonder if they are sustainable. As the red line in the chart below (courtesy of Ed Yardeni) illustrates, S&P 500 profits are running at 10.2%, a level we’ve basically never seen. What could bring profit margins down? Increased input costs on everything ranging from wages to commodities to transportation for one. Or, heaven forbid, a recession.

To some degree higher profit margins are a natural consequence of an intellectual property based economy. 10.2% would be a terrible year for a lot of the technology companies that are increasingly dominating the S&P 500. Still, it would probably be best not to count on profit margins remaining as high as they are right now. 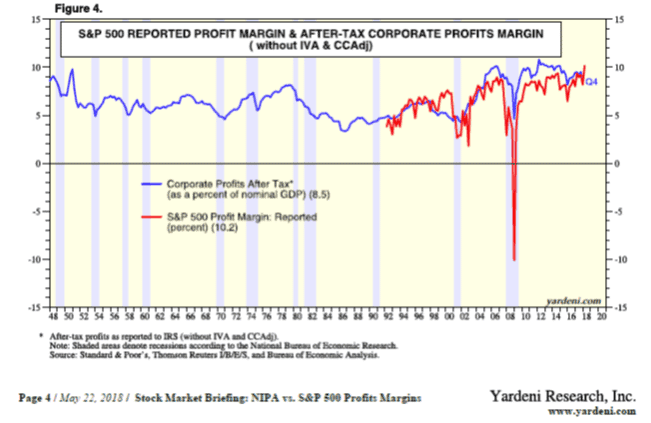